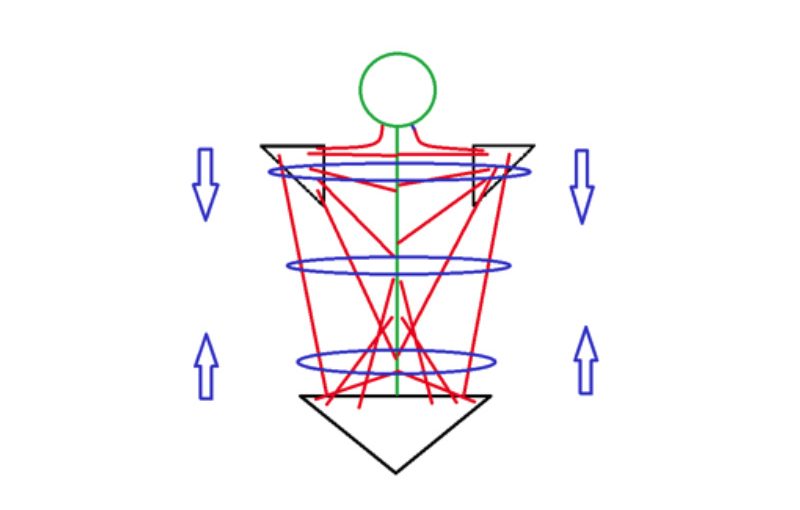 This concept can best be described as to tolerate and withstand, in your most optimal posture, the forces applied to your spine from head to tailbone with resulting in movement from the ball and socket joints i.e. your shoulders and hips while maintaining spinal stability throughout.

Let us break down the structure which this applies to. Back stability is often wrongly looked at as the stability solely provided by the low back and the muscles at the front of your body between your rib cage and pelvic bone. In fact, the structure we need to consider is the whole spine and more accurately the region between the shoulder blades and pelvis (Ilium bones). These bony structures are the anchoring points from which the muscles attach to then stabilise the spine. This means we are looking at the spine, for argument‘s sake, having four anchoring points in the corners of an upright tube-like rectangle, the trunk.

When you are not using the anchoring points, you have a greater chance of damaging your spine

Why is it important to understand this? Well, when you are able to fix the shoulders on top of the pelvis and stop movement such as flexion or rotation in the trunk, you are able to understand how making use of the anchoring points and building strength in between them, will lessen your chances of damaging your spine. Developing the feeling of bracing the core and fixing a shoulder or hip when exerting force, either pulling or pushing will reward you greatly. This will allow you to enjoy your movement more and help achieve your goals faster, in other cases it will resolve an injury but it will definitely teach you how to protect your spine.

Before we take a step further and put this into action, we should first understand how to find and develop a feeling for a neutral spine posture. The “neutral spine” is usually the midpoint between looking up extremes when twisting the hips forwards and backwards and for most people it would also mean raising the chest bone 1-2 centimetres. It is technically the most neutral position for the discs and vertebrae throughout the whole spine. With the neutral spine in position, you are able to connect the anchoring points and create tension throughout by pulling the shoulder blades towards the pelvis using your chest and upper back muscles and simultaneously bracing in the abdominal area. The idea is to create maximal tension and fixing the vertebrae of the spine.

The concept of spinal stability cannot be captured and claimed in a single form, meaning that there is not one golden way of doing this. Your spine needs intersegmental movement (movement between the vertebrae) as much as it needs to be locked up in other circumstances under certain loads. Sometimes your spine requires a great deal of stiffening with limited movement like when a weightlifter catches weight well over his own body weight. At other times your spine needs to change position while maintaining a level of stiffness in order to perform the task such as hitting a tennis ball. We can even go further and look at forms of sport or work where the spine is not in a neutral spine position at all, such as wrestling or tightening a bolt when changing a car wheel. This does not mean you are not using the anchoring points to stabilise your spine, we are always using them but in this case in a different way. It means that you are changing the forces through the spine and that your discs likely have to cope with more pressure and sheer forces where a vertebra is being pushed or pulled in translation (gliding effect) with relation the next. These forces and pressure does not have to be a problem if the discs are healthy and strong enough, assuming that your spine is regularly being exposed to many different movements, not only exposing your spine to these kinds of forces.

The last point worth noting is the involvement of the nervous system when wanting to stabilise the spine. We need to be able to have the right program coming from the brain to engage the best set of muscles in order to do the job. If your brain is not used to using some of the muscles which protect the spine in certain movements, then it becomes increasingly difficult to call upon them when needed. We want to create highways of communication to these muscle groups instead of a narrow country lane. The more you use these muscles in concert to create a stabilising effect in different situations, mostly through training, the more stability and protected freedom of movement you will experience during your work, sport, or physical hobbies.

Chiropractor with interests in functional rehabilitation/movement and nutrition.

Why you shouldn’t be surprised to get back pain!
Scroll naar bovenzijde